Do you enjoy References and Easter Eggs on games? If so, than you'll love this game which is a game all about references.  That's right! You must get the reference in order to proceed in the game.

One day, Joe Gamer (the player), is playing at his favorite Arcade Center, but this is the last time he is there. The Arcade Center will close because business is not going well. The rise of home consoles, as well mobile game just made the Arcade Center obsolete, special in a small town as his town.  The Arcade Center owner don't have enough money to pay the bills and the building is also sold to a big company so they will demolish and turn it build some new Cellphone Accessories store.
Joe had such good memories on that place, playing the hottest games on his youth, some exclusive arcade games that came out recently, earned neat price and made some friends along the way in that store. That taught of it being demolished is just awful.
While he is playing a game, a mysterious old man talks to him saying that he also sad for the Arcade Center's fate and offers our hero a special arcade token. With that token, he could play unlimited times on the arcade until it closes. Without thinking twice Joe Gamer puts the token in the closest game cabinet but something strange happen.  A weird light comes out the machine and he gets sucked in to a different dimension!
On this dimension the old man that gave him the token, explain that he could save the arcade center if clear all challenges ahead of him and bring back the the trophy of the Ultimate Reference Master.
Knowing that the cake is a lie, but the chance of saving the arcade is real he will jump on the adventure ahead. 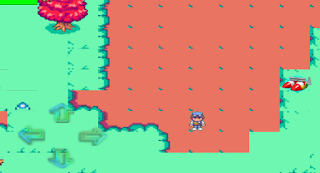